A Swedish contribution to a healthier world 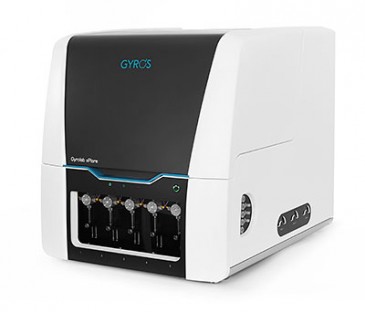 In the middle of this revolution is the Swedish company Gyros AB, based in Uppsala. Practically every large pharmaceutical that develops and manufactures biopharmaceuticals is already using their so-called immunoassay platform, a system that analyses samples in pre-clinical and clinical trials. And with the introduction of the Gyrolab xPlore, the company has presented a product that lowers the threshold for even more labs around the globe to start using their revolutionary platform in the pursuit of alleviate and cure disease.

So what’s it all about, in simple terms? Biopharmaceuticals are large molecules that have been purified or produced from blood or plasma, or have been produced with so-called recombinant DNA technology. They are used in the treatment of serious illnesses like rheumatoid arthritis and cancer. Due to its complexity, biopharmaceuticals cannot be characterized only by testing the final product. The molecule structure of biopharmaceuticals is sensitive to change in the method of production, and small structural differences are hard to detect. This is why a description of the process and process controls are critical parts of securing the product’s quality. Characterizing a biopharmaceutical requires a combination of trials of the substance and the final product, combined with knowledge on the manufacturing process. This is where Gyros’ platform fits in.

The platform saves time and eliminates the human factor

When developing a new pharmaceutical, the candidate is first tested in pre-clinical studies on animals, for example mice and rats, and the data is reported to the Swedish MPA, or equivalent authority in other countries. The drug is injected in the animal, after which a blood sample is extracted in order to find any side effects and how large the dose should be. Gyros’ platform is also used in the next step of the development, clinical tests on human patients. 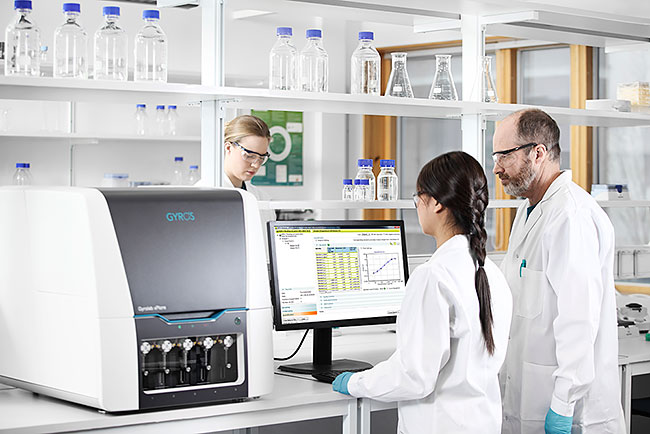 What distinguishes the platform from other available methods, is that it requires only an extremely small volume of blood in order to receive reliable data, and that the entire process is automated. The first makes it possible to do many tests over time on the same laboratory animal, which reduces the number of animals needed for a study, while the latter means substantial savings in working hours and staffing.  Moreover, eliminating human error and the system provides standardized results, which is particularly important as this type of trials are underway for several years.

Compotech has collaborated with Gyros since the beginning of the 2000s, when their first instrument, Gyrolab xP workstation, was developed. This model remains an important product for large laboratories that need to run many tests, as the system has the capacity to analyze up to five discs with samples simultaneously. Gyrolab xPlore, on the other hand, offers the market an even more convenient alternative at a lower price. The same great technology, but in a more compact package and focus on one sample disc at a time, perfect for customers that need a flexible immunoassay platform but without the need to run large amounts of trials.

During the development of Gyrolab xPlore, we were given the confidence to participate with our motor expertise already at the concept stage. The main challenge was to identify, modify and deliver motors suitable for use in a medical instrument, with the ability to handle the robotic motion that handles the disc and the samples. The project started in April 2013 and the product was launched on the market less than two years later – a testimony of how smooth the development progressed.

Naturally, we are incredibly proud to have contributed to a product that simplifies the development of new biopharmaceuticals. If you think this is as exciting as we do and want to learn more about Gyrolab xPlore, please visit their website.

MED Engineering has been publising the Gyros case, download the journal and learn more.